Attacker: Step forward performing a low front smash kick from the back leg (left), landing in walking stance twin low section block. This is not blocking anything, it just makes everything look tidy.

Counter by raising the back heel from the floor and landing it as you perform a high twin vertical punch, (Nopunde sang sewo jirugi). Kihap on this technique.

Attacker: Bring the back leg round and perform a middle turning kick landing in a right L-stance.

Counter by sliding to the opponent forming a right fixed stance performing a right back elbow thrust to the solar plexus, (Gojung so orun dwit palkup tulgi). Kihap on the elbow.

Counter by slipping the front (right) leg forwards into a walking stance simultaneously grabbing the head with both palms. Then pull the head down as you execute an upwards kick with the knee (Ollyo moorup chagi) to the solar plexus (Myong Chi). Kihap on the knee.

Defender: Step back into a left walking stance performing an obverse rising block with the knifehand.

Attacker: Step forwards, performing a middle side piercing kick form the back leg, to the opponent’s shoulder.

Defender: Step back into a left L-stance while performing a right inward outer forearm block to the side piercing kick, knocking the opponent round so that they now face away from you on a 45 degree angle.

Counter by performing a low front snap kick from the back(left) leg to the base of the spine, the coccyx. Land in a right walking stance performing twin upset punch to the kidneys, (Gunnan so sang dwijibo jirugi). Kihap on this, and make sure your head is clear of being elbowed by the attacker.

Taekwon-do is for Everyone! 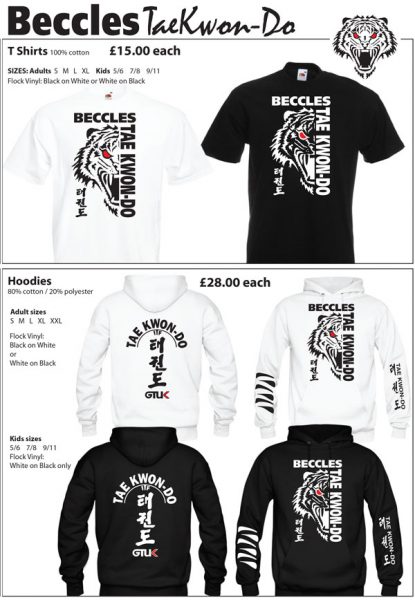 Family Taekwondo classes from home. Join in with a relaxed class for everyone.

Please follow the link and ask to join the group to watch the tutorials live or later.

Stay Safe and Do Taekwondo!

Join the group to watch live or later.

Please follow this link and ask to join the group for future announcements:

Syllabus PDF files are linked below:

Note: some pdfs are secured by GTUK student password,
email [email protected] if you haven’t got it!

Check out YOUR belt information on our Beccles Taekwondo website to keep you busy.

Remember to PRINT OUT and practice your Terminology for your belt grade! (Message us for the password)
https://beccles-taekwondo.co.uk/belt-grading-sylla…

Also: NEW GTUK Puzzle Books and Word Searches added to the GTUK website . . . and for big kids too!

So follow this link and ask to join the group for future announcements:

For further information about the Coronavirus and for advice visit the gov.uk website. ... See MoreSee Less

We are cottage industry, so work carries on!
Please support us during this crisis if you can.

Beccles Taekwon-do is a member of the British Taekwondo Council, the National Governing Body for Taekwondo.

The BTC has achieved NSPCC Advanced Standards in Safeguarding.

Beccles Taekwon-do adheres to all of the BTC’s Safeguarding policies and procedures.